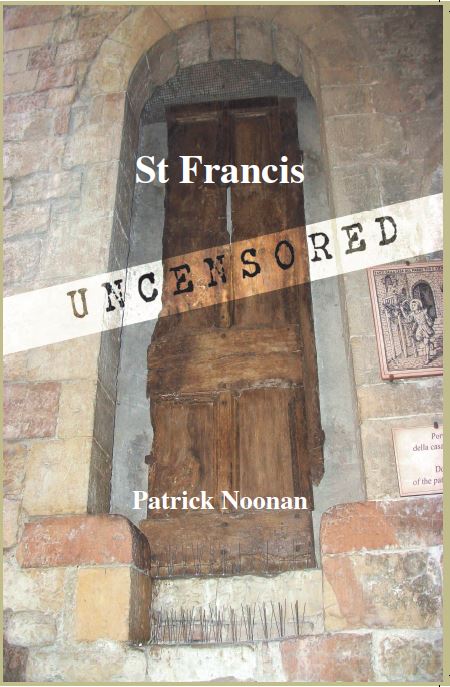 For eight hundred years there has been a vast book industry surrounding the memory of Francis of Assisi and the only information that has leaked out to the ordinary people of the Western world is that he loved wild animals. Well, perhaps pets too!
This new book from Patrick Noonan, bestselling author of "They're Burning the Churches", seriously undermines that cosy perception. It is a mature person’s guide to Francis of Assisi – a young man, a dandy in his day, who nearly became the greatest cult leader of his time. Reader be warned!

Why is it that for 800 years a vast amount of research and writing has surrounded St Francis yet the ordinary people of the Western world still see him simply as a saint who loved animals?
Why did their families think that Francis and Clare were runaway lovers, caught up in a strange medieval cult of which, some thought, Francis was the leader?
Was St Clare, who spoke truth to power, an early leader in world feminism?
Why do some elements of Islam, a faith from which Francis learned so much, even today claim St Francis as their “saint” and Time magazine speaks of this as a crucial link between East and West?
In this no-holds barred, eye-opening account the author peels away layers of tired thinking and discovers a bright new world with many alternative questions to ask. He invites the reader (and biographers straining to explain Pope Francis) to join him in exploring avenues that shaped the tantalizing, even unorthodox, spirituality of St Francis and Clare of Assisi.
Whenever Patrick Noonan puts pen to paper prepare for a few surprises. He has done it before and he does it again with St Francis, Uncensored. And that is what we need most today. To be surprised out of our boring routine.
To be awakened again to the dream of Francis which is old but always new.
Brendan Forde – a friar who has accompanied people in Chile, El Salvador, Guatemala and Colombia over the past 40 years.